Justin, my two year old, has some behavioral issues. See how I am dealing and follow the saga. 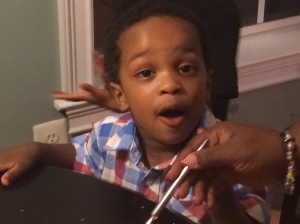 So, my two-almost-three-year-old gives me the worst time when I take him out in public. It has gotten to the point where I am afraid to take him anywhere, including church! I have good reason, he randomly yells at people passing by, hits other children, and makes faces at strangers. Of course, I researched and came up with a load of possible reasons why he is the way that he is, my little sprout watching bundle of joy. I had narrowed it down to just a few, oppositional defiance disorder, severe ADHD, and borderline personality disorder. I’ve already taken him to a child psychologist and she prompted me to use the program 1,2,3 Magic! I hope that it works because it is getting hard to find a babysitter to watch him while I go to the grocery store.

After my own analysis of the situation and then speaking with the child psychologist, I came to the conclusion that it “should” be hard to label a two year old. For goodness sake, one of the guidance counselors at my school thinks her son has sociopathic tendencies. Of course we don’t truly believe that there is anything wrong with our children but what we do know is that the behavior being exhibited cannot continue and we want to take action now. Justin’s (my son) pediatrician said that his behavior is normal, especially for a child who spends all day with his older grandparents and is not used to going out and interacting with other children. He stated that the negative behaviors should start to diminish after he starts preschool.

But, guess what? He must be potty-trained to start preschool. And Justin’s response to potty training…. a resounding “No”!

The saga to be continued….